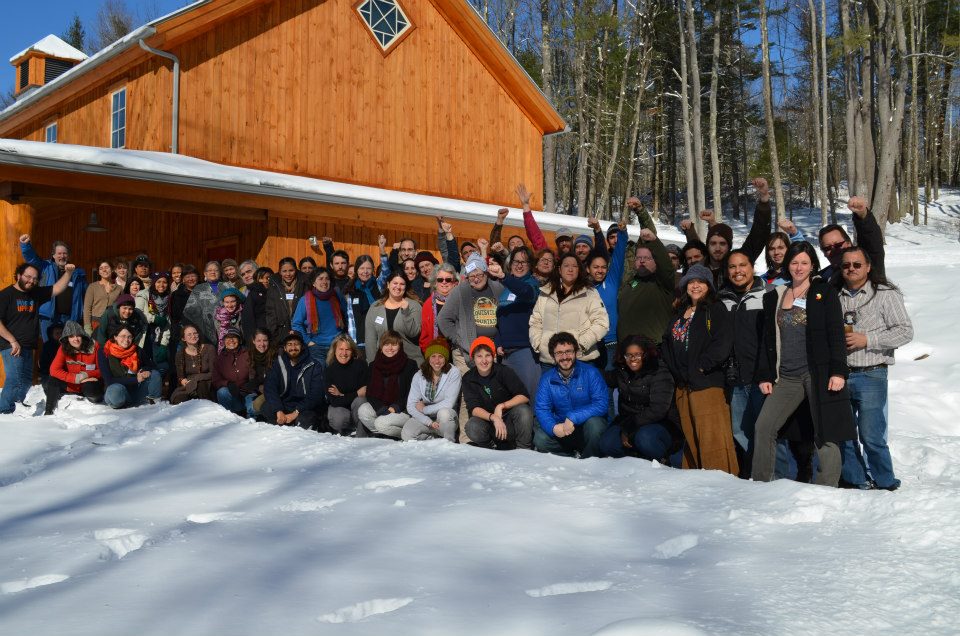 Ashokan Center (NY) - Our very first Extreme Energy Extraction Summit was held at the beautiful, historic Ashokan Center in the Catskill Mountains of upstate New York in February 2013.  Facilitators from the Highlander Center led us through an intense, exciting and fun 3 days of dialogue.  Seventy organizers representing fifty organizations from across the country from struggles against coal, gas, oil, tar sands, uranium, and industrial biomass.

We came from groups working on grassroots community organizing, research and education, state and federal policy, litigation, direct action and radical art to move forward the difficult process of building a unified movement against energy extraction big enough and strong enough to win.  At the 1st Summit, we focused on trying to identify shared values and visions of what we are seeking to begin to build a common language across our struggles.  While we didn't come an explicit consensus on a set of principles, we identified 7 core concepts that resonated with the majority of participants.

We also created a lot of Open Space time for participants to share their work with each other and develop proposals for collaboration.  Folks were so enthusiastic about working together that they came up with a dozen proposed projects!  While many of these proved to be unrealistic given the capacity of the group, a conversation around unified messaging for public protest actions evolved into “Fearless Summer”.

Fearless Summer was an open call for citizens across the country to take action in defense of their communities in a united front against all forms of dirty energy.  Coordinated by a network grassroots activists from a wide spectrum of groups, Fearless Summer saw dozens of bold actions across the country united under a common banner and message of unity.  The initiative both linked up existing plans for the summer and inspired new groups and individuals to take action.  It even inspired activists in Australia to organize their own “Fearless Summer” during our winter.

Fearless Summer was a perfect example of the kind of collaboration we hope to foster.  We were able to increase profile and power of work that participating organizations were already doing and promote the concept of a unified movement by creating a common narrative that linked our struggles – without creating bureaucratic structures or demanding that actions be planned around a central strategy.

In the midst of this intense work, we were able to create time for deep relationship-building and some fun too.  Some of the indigenous participants organized a talking circle one night.  We had a fantastic open mic night, saw a song get composed out of our discussions of visions and values, and still had time for snowball fights and hanging out in the sauna.  Overall, there was an incredibly powerful feeling in the room during this summit that we were on the cusp of something very big, and participants report that they continue to be in dialogue with the people they met.