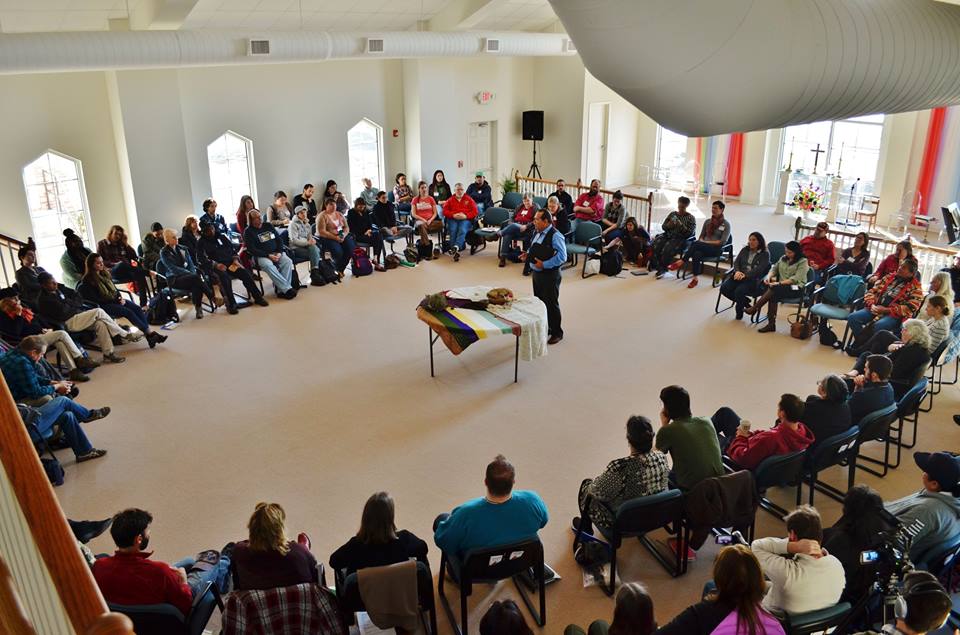 The 4th Extreme Energy Extraction Summit was held January 30th – February 2nd, 2015 at the Seashore Assembly in Biloxi, MS.  The Summit was our largest and, by all accounts, most successful yet with 95 participants including over 50 new participants from 25 new organizations across the typically diverse spectrum of our movement.  We even had our first overseas participant, an anti-nuclear organizer from Belarus!  Critical to the success of the Summit was the strong participation of Gulf Coast groups led by a powerhouse host committee including the Bridge the Gulf Project, Gulf Future Coalition, Gulf Coast Center for Law and Policy, the Mobile Environmental Justice Action Coalition, and the Mississippi Coalition of Vietnamese-American Fisherfolk and Families.  We were also honored to be welcomed to the region by Chief Dardar and other representatives of the United Houma Nation and blessed by Bobbie C. Billie of the Council of the Original Miccosukee Simanolee Nation Aboriginal Peoples.

The eastern Gulf Coast Environmental Justice Solidarity tour on Friday grounded us in the struggles and experiences of impacted community members.  Starting off our day in Biloxi, we met with fisher folks that detailed the impacts on their health and livelihoods from the BP oil disaster and the struggles getting compensation and restoring the Gulf.  We then drove past the massive Chevron refinery in Pascagoula, MS on our way to the historical Africatown community, the site of the last slave ship landing in the US for a delicious lunch.  We heard presentations from numerous groups around Mobile Bay about the history of the unique Africatown community, struggles to recover from Hurricane Katrina and the BP disaster, and efforts to halt the construction of coal export facilities, tank farms and Bakken and tar sands transportation infrastructure.  Finally, we traveled to the community of Wedgewood in Escambia County, FL for a powerhouse press conference on the devastating health impacts from 7 huge landfills, some containing oil clean up waste from the BP spill.  (Good news from Wedgewood! One of the pits was ordered to close and given 30 days to clean up their violations!) Many thanks to all the communities for opening their doors and hearts to us.  We all walked away moved and inspired to continue support Gulf Coast communities.  Check out this fantastic video of our tour from Bridge the Gulf.

At the heart of the Summit's success was finding a real clarity about what the Collaborative is all about.  These Summits provide a intimate place, accessible to the smallest, unfunded community group and the largest environmental organizations, to the newest community leader and multi-decade veteran directors of national organizations, where organizers have the time and space to have the conversations they most need to have and build the strong personal and institutional connections across our movement that are critical to sustaining and catalyzing our work back home.  Grounded in our history, our values, and our principles and guided by our absolutely fantastic facilitators Adrienne Maree Brown and Hannah Strange, we did just that.

As always, a huge diversity of rich discussions came out of the group.  Many sessions focused on creating ways to share resources across the movement, from toolkits and success stories to funding opportunities and past practices.  Others focused collaborative actions, such as holding a gathering based on spirituality, developing a community disaster response network, planning an escalating series of direct actions, and a campaign of anti-fracking ballot measures in 2016.  Participants also dove into big conceptual discussions around capitalism, false solutions, the rights of Mother Earth and Father Sky, movement-wide narrative and intersectional organizing.  Still other proposals focused on the Collaborative itself including adding a youth-led session, a piece on accountability and power within the movement and more space for skillshares at the next Summit.  Check out the complete list of Next Steps and full notes.

Of course many of the biggest outcomes from the Summit happened in the other time we spent together, over meals, watching the sunset on the beach, at the unforgettable crawfish boil (thanks Uncle Mac!) and the equally unforgettable Open Mic.  It is the relationships we built with each other that hold the most transformative power in our movement.

Kicking Off a Big Year for the Gulf South

We were honored to be the first event on the Gulf South Rising! calendar, a yearlong, region-wide movement of coordinated action highlighting the 5 year anniversary of the BP disaster and the 10 year anniversaries of Hurricanes Katrina and Rita and demands a just transition away from extractive industries, discriminatory policies and unjust practices that hinder equitable recovery from disaster and impedes the development of sustainable communities.  Regional organizers briefed us on goals, plans and principles for the year and talked through the kinds of support they need from the broader movement.  We were all inspired by the powerful leadership in the Gulf and numerous commitments were made to supporting Gulf South Rising! including fundraising and digital technology support.  Particularly exciting was the interest from participants from national organizing in making GSR! events a model for how national allies can take the lead from and be accountable to local leaders in national scale actions.