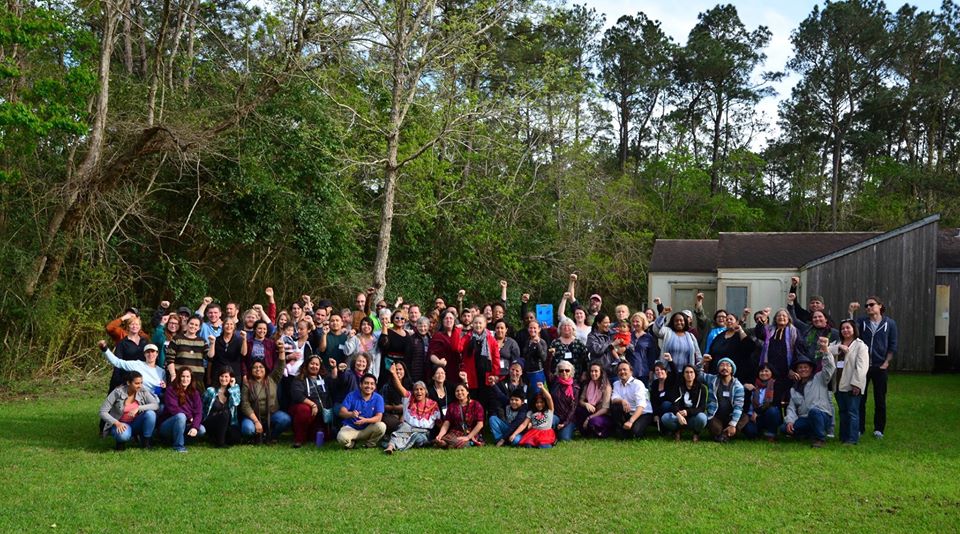 The 7th Extreme Energy Extraction Summit was held March 10th - 13th at the Christian Renewal Centerjust outside of Houston, Texas, in the very heart  of the oil and gas industry. With the recent dire turn in our national politics and the intensity of the Standing Rock protests, we were prepared for participants to come in with a “crisis mentality”. Instead, folks showed up to the Summit ready to roll up their sleeves and work, focused on the opportunities being creating by this political moment, while still acknowledging the deep challenges we face in our communities. This mindset is a real credit to maturity of the Collaborative after 5 years, the trust that we have built. and the experienced leadership of the Summit Planning Working Group, our superb facilitators, Adrienne Maree Brown and Ananda Lee Tan and our incredible hosts Texas Environmental Justice Advocacy Services (TEJAS).

This maturity and trust was on display even before the Summit began. The Collaborative marked another first by coordinating support for direct action in the host community. During the week before the Summit, a number of E3C participants organized an International Women's Day protest of CERAWeek, one of the world's largest energy industry conferences. In keeping with our model, E3C did not organize the protest, but relationships formed through the Collaborative and coordinating the timing facilitated the involvement of key organizers. Our growth was also on display at the end of the Summit, when some organizations, including first time participants, were putting in bids to host Summits as far out as 2020.

Once again, we had a wide range of conversations--from caucuses of youth organizers, POC organizers and rural organizers; to technical skills shares about grassroots fundraising, fighting the gas industry and stopping permits from being issued; to discussions of some of the most complex challenges facing our movement. (Read full edited notes from the Summit here). However, despite a very productive and positive weekend of discussions, many longtime participants were left wanting more. All in all, the 7th Summit felt like it challenged us to ask what more the Collaborative can do.

In the Belly of the Beast

We began, as always, with a powerful Environmental Justice Tour. Organized by TEJAS, our journey through the belly of the beast showed us just a small piece of the roughly 50 miles of contiguous oil and gas and petrochemical facilities between Houston and Galveston. The scale was truly jaw-dropping. We drove past (and sometimes through!) miles upon miles of storage tanks, refineries, and chemical plants. A stop by the Texas Monument, a commemoration of takeover of Texas by Americans, reminded us of the deep ties between colonialism and environmental devastation. As if to drive home the point, we shortly passed a massive chemical storage tank with a huge mural depicting white settlers shooting at Mexicans at a famous battle. Our final stop brought these connections into the present. The community of Manchester, a nearly entirely Latinx community is completely surrounded a Valero refinery, a fertilizer plant, and other industry - an island of trees and houses in a sea of toxic facilities. Some homes are so close to the refinery that you can open a window and poke a tank with a stick. We were all hit hard as TEJAS organizer and Manchester native, Yudith Nieto, told us about growing up there and the terrible impacts on community health.

Rising to the Challenge

Across many sectors, the current political crisis is changing attitudes and bringing new folks into the movement. One of the most inspiring things about the Summit was the calm determination of the group in response to this political moment. Even before the election, we were seeing a massive growth in the movement (in no small part due to the Standing Rock protests), which has only accelerated since November. This exciting development has brought with it a host of new challenges as well as opportunities, and we tackled both aspects of the difficult moment throughout the Summit. We dove into many of the challenges presented by the rapidly growing movement, including limited training, infrastructure and coordination resources, and cooptation by the Democratic Party (see the “Indivisible” breakout) and other liberal forces. Participants reflected on the difficulty of maintaining momentum between big events, and the potential destructive effects of that having so many inexperienced folks with privilege can have entering into movement space. Folks spoke frankly about the need to decide whose voices, whose time gets prioritized. Discussions made it clear that we need greater coordination between existing training and organizing networks, better tools for coordinating large networks, and a deep re-thinking some of how we train new activists.

One of the weekend’s highlights was an amazing fishbowl discussion kicked off by veteran Standing Rock organizers and some of the country’s most experienced direct action trainers. While acknowledging all the incredible things about Standing Rock, folks spoke frankly about its tactical failures. Despite the many thousands at camp, most of the direct actions were small, ineffectual, and extremely costly for participants--federal and state law enforcement is still aggressively pursuing charges against water protectors. People spoke about the need to beef up our preparation and support for the trauma of action and longer-term community defense infrastructure. Some even questioned whether it made sense, particularly for people of color, to intentionally get arrested. All around there was agreement that we need to expand our vision of direct action tactics beyond one-off actions and temporary camps, as our existing “playbook” seems played out. Reflections on Standing Rock also brought up deep issues of decision-making during collective action. Folks talked about tensions between consensus-based processes designed to make “every voice count” and traditional, indigenous models that emphasize leadership of elders. They also discussed the struggles of either one to effectively “scale up” in the moment and incorporate vast numbers of inexperienced activists.

In addition to activating lots of new people, this moment has shaken some existing mainstream institutions. One breakout discussed how the Trump election had split labor and opened up the doors for some unions to work with EJ groups. One of the most exciting conversations of the weekend revolved around how to pressure funders into changing strategy and culture. While existing initiatives have led some funders to acknowledge past strategies have failed and commit to increasing support, relatively little money has moved. To address this, participants starting planning “Decolonizing Philanthropy,” an ambitious campaign to get funders to come to training and relationship-building events organized by the grassroots - the kind of face-to-face interactions that we have learned are truly critical to changing culture.

Part of the secret to E3C’s success is that we keep learning from our past and our participants and continue to adapt our model. With so many Summits behind us, we have been looking for ways to carry conversations forward from Summit to Summit instead of re-inventing the wheel.  One of our main, successful innovations was to have the Planning Group develop the first round of breakouts ahead of time based on ongoing conversations from past Summits. Alternative grassroots fundraising strategies, defending activists and marginalized communities from corporate and state intimidation, and local and state-level energy policy were all discussions that came out of breakouts from the 6th Summit in PA. Another great proposal from PA  that somehow got lost in the process was carried forward to Texas - a discussion of challenges and successful strategies for organizing in “Red States”. And the “Decolonizing Philanthropy” breakout grew from seeds planted way back at the 3rd Summit! We are excited to see the breakout process continue to develop,  running more smoothly and with greater continuity than it ever has before.In fact, the whole Summit went more smoothly. We even stuck to the agenda the whole time - another first!

The weekend was remarkably free of the painful-yet-productive open airing of conflicts and tensions that have been such a hallmark of our space. Some long-time participants didn’t even know how to feel about it, since for so long, the working out of those tensions has been so core to E3C’s identity. Many explanations have been offered, not the least of which was  the absolutely amazing opening prayer ceremony offered to us by Doña Tere. Ultimately, our hope is that this dynamic was a tribute to the maturation of the relationships of trust we have built over the years, and reflects E3C’s true commitment to transformative justice. We made this commitment explicit for the first time at this Summit, and both the full group and breakout sessions about it were extremely well-received by participants.

The process of doing these Summits has taught us that the collective wisdom that emerges in the room when we get together gives us a perspective impossible to gain on our own. This wisdom means that the Summits sometimes feel “ahead of the curve”. Given all that has happened in the last year, many people (including some of us Summit planners) expected a room full of people expressing trauma, airing deep tensions and hurts, and calling for the movement to re-think everything . But that actually happened at the 6th Summit, before Standing Rock blew up, before anyone thought Trump would actually be elected. If the trend of our collective wisdom holds true, there’s reason to be excited - Houston was a weekend full of ambition and determination to step up to the moment. The 7th Summit, along with the increasing legitimacy and importance of the Collaborative within the movement, has left us with the belief that E3C is ready to take the next step. Our challenge now is to figure out what that step is. We can’t wait to figure it out with you.