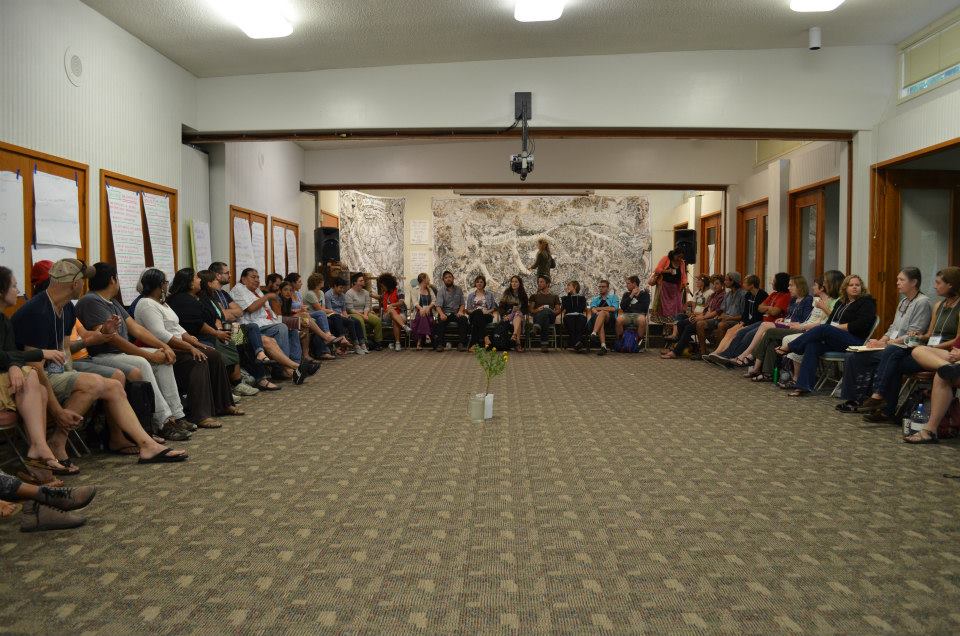 Koinonia Retreat Center (MN) - Our 2nd Summit was held in September 2013 at the Koinonia Retreat Center in South Haven, MN.  Once again we are privileged to have Highlander Center facilitators.  We had 80 participants, with 50 of them new to the Collaborative representing 30 new organizations.  In particular, we greatly increased the participation from groups in the Midwest (one of the goals of moving the Summit around regionally) and from “Big Greens” and funders.  While the Collaborative is primarily composed of grassroots groups, we intentionally reached out to larger national organizations and funders because participants identified the need for them to be part of the conversation and to learn from our dialogue.  We need all players at the table to shift the dynamics in the movement.

At the 2nd Summit, we talked a lot about what movement-building means and how we can spark and sustain a large-scale social movement on Extreme Energy.  We also dove into thorny issues about power dynamics among the grassroots, “Big Greens”, and funders.  Models of successful collaboration were presented as well as examples of problems that had arisen, and we brainstormed ways to improve these dynamics and increase equity in our movement around funding and decision-making.

The representatives of the larger national organizations reported the Summit having a powerful impact on their work and strengthening their advocacy within their organizations for increased responsiveness and accountability to grassroots groups.  We also held a series of powerful “fishbowls” to hear front-line community organizations, people of color and younger organizers reflect on the state of the movement.

We broke up into groups to discuss particular areas for collaboration including training, media and messaging, alternatives, cultural organizing, direct action, and the future of the Collaborative.  While these did not yield large-scale projects like “Fearless Summer,” they were deeply thoughtful conversations that sparked many smaller collaborations between individual groups.

We also had fun, with another open mic, swimming in the lake and, yes, hanging out in another sauna.  After the 2nd Summit, we began a robust feedback process that saw us conduct one-on-one interviews with roughly 40 participants to help us shape the future direction of the Collaborative.  Notes from the 2nd Summit can be found here.